Earlier this year, our daughter  was in England for 2 months as a Fine Arts theatre student from Memorial University in Newfoundland – at their campus in Harlow, about 35 km north east of London. Aside from rehearsing their 4th year final production, their assignment was to see at least 20 live performances and critique them, using what they’ve learned from their theatre studies. So every evening we’d get a text from Sarah telling us what she had just seen on stage, and every message finished with “It’s my favourite one yet!”

As I’ve been reading through the post-resurrection narratives in this Easter season, I’ve had a similar feeling – well, in a small way, at least.  Each Easter season as the lectionary changes up the play list for us, I find myself reading each one with awe – with an excitement as though it were my first time hearing it, and, in succession, each one becomes my “favourite.”

Once again this year, the drama has been rich and satisfying. Did you see the angst on Mary’s face and hear the panic in her voice, when she asked the Gardener “Tell me where you have laid him”? And did you witness the joy on that same face when she recognized her beloved Teacher? Then there was Thomas’ raw and real doubt, brilliantly contrasted with his whole-hearted affirmation of faith when he touched Jesus in the flesh. And that scene by the sea-side, after the Stranger on the shore tells the experienced, exhausted fishers to “just try the other side of the boat” and the enormous catch they hauled in. And couldn’t you just smell – and taste – those crispy fillets of fish at breakfast that day? And didn’t you feel the sting of Peter’s hurt at being asked 3 times about his commitment? Then there were the sheep stories and the command to love.

Each week, each one has been “my favourite one yet!” Perhaps the best of all is Luke’s telling the story of two (sadly unnamed) disciples who on Easer evening begin the lonely walk towards Emmaus; 7 miles, just a little over 11 km, from Jerusalem. They don’t seem to know what to make of the “idle tale” that the women have told them – how they had gone to the tomb earlier that day to anoint the body, only to be greeted by 2 men in dazzling clothes, the tomb gapping open – and empty; and how those men had reminded the women of Jesus’ very own words concerning his resurrection. Nor could the Emmaus-bound travellers grasp what Peter had reported: that the tomb was well and truly empty; the body – the person – was well and truly gone. 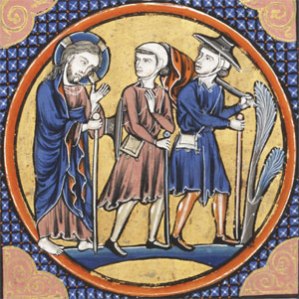 So the two of them set out on the road, and like you would, they are talking, heads bent, voices passionate, when this Stranger joins them. And the two are amazed that he somehow is not aware of all that has happened and so they recite, in words almost like the Creed, the chronology of recent events. They share their sorrow and their incredulity, and in return, the Stranger reminds them of their shared salvation history. And when they arrive at their destination, the Stranger continues on. They call after him and offer hospitality.

Now, I can’t decide which is my favourite part of this story – whether it’s what just happened on the road, or what happens next.

As heady as the conversation has been, the practical, physical necessities of life take over. It is almost evening, the day nearly over – they’re hungry from the journey, tired from the excitement, and they sit to eat. And it is while he is at table with them, when he takes the bread in hand, and blesses and breaks it, and gives it to them – that their eyes are finally opened – and then he vanishes from their sight.  A moment, a glimpse – and then it’s gone.

Isn’t that precisely what we so often get – just a moment, just a mere glimpse of the Divine – and then it is gone? So many such encounters are so often missed because we are paying attention to so much else.

We all know the truth that hindsight is 20/20. There were so many clues, yet they missed solving the mystery! I believe it was the prophet Yogi Berra who said “You can see a lot just by looking”.  They said so themselves: “Were not our hearts burning within us while he was talking with us on the road, while he was opening the scriptures to us?”

On that road to Emmaus, these two disciples failed to recognize the very friend they so grieved: they talked about Jesus more than they listened to him, even while he was reflecting on the scriptures with them.  What happened next in the Emmaus story foreshadows how important this simple, enacted parable became for those early followers and why it has remained so central to our Christian practice all these long years since. At that table in Emmaus, Jesus did not use words. The time for talking was over. He simply took the bread, blessed and broke it and gave it to them. And they recognized him. It was that recognition of Jesus, in the midst of the pain of life, which re-energized them to move out in faith – first, returning to Jerusalem to tell the rest of the community what had happened to them, and from there to join countless others in sharing the good news of the Resurrection.

And so it has been with the Christian community every since. Our mentors in the faith, and we ourselves, each in our own unique and gifted way, have come to know Christ and then been inspired by the Spirit to make him known. May each of us recognize Christ in the breaking of the bread and in the brokenness of this world. And having caught a glimpse of the Divine, may we respond to the invitation to tell others the good news, to share glimpses of the Divine with the whole world

The Rev. Frances Drolet-Smith is an Oblate of SSJD and the Rector of St. Alban’s Anglican Church, Dartmouth, N.S.

My fingertips are dipped in scorching water on the eve of the first snowfall. Dipped in holy water; cleansing vessels. Warmed by these tears, this ritual, and sacrament; frigid moments before. Purify me, O Holy One. Evening made its approach, once again known; present. Stillness lying in wait. From the heavens, through the night, matter, […]

Writing a rule of life is like writing a story while you sit on a park bench in the pouring rain waiting for the sun to come out: you want to be in the right frame of mind, body, and spirit. I have spent the whole time since the beginning of Lent way back in early March […]

These wandering tales and postings as a Companion have followed me through the gospel. Through Advent, in joyful expectation and the coming of the light. Birth has carried to term transformation; a new miracle. From three gifts and great kings; winter. From the desert, over forty days and forty nights, to Jerusalem. Finally, finally, we […]

“Put on the Lord Jesus Christ”

Homilies for the Paschal Triduum by Fr Bill Morrison, for St John’s House, Victoria April 18, 19, 21, 2019           Maundy Thursday “Jesus, knowing that the Father had given all things into his hands, and that he had come from God and was going to God, got up from the table, […]

The third week of Lent has arrived, at last, and to paraphrase something I heard Sunday morning, we are in the deep of it now. Indeed, the trudging towards Jerusalem has begun. I wonder if, like the grass outside my window, we are all just waiting to be brushed through into spring, though spring began […]